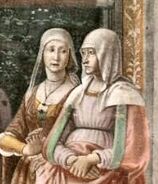 Welcome to the Historical Closet![]

Here you will find collections of information about how to create accurate historical representations of the clothing worn in different times and places using commercial and free 3D resources.

We're interested in making historical clothing and objects that are as authentic as possible. This covers many areas from fabric and dyes, decoration and styles to how much flesh should show and where or the correct body shapes from corseting. All of this needs research and information sharing.

We hope to cover a range of periods and cultures. Trying to 'get it right' is important for historical renders but can also help make fantasy work more consistant and convincing.

What we have made[]

There are a number of ways to browse our information links:

Early cultures and civilizations Roughly up to 500AD.

[| Costume collection] at Manchester Museum, UK - dress from 17th to 20th centuries including some working clothes

Janet Arnold 1985 Patterns of Fashion: The Cut and Construction of Clothes for Men and Women c1560-1620

Janet Arnold 2008 Patterns of Fashion 4: The Cut and Construction of Linen Shirts, Smocks, Neckwear, Headwear and Accessories for Men and Women C. 1540-1660

Ruth M. Green 1995 The Wearing of Costume: The Changing Techniques of Wearing Clothes and How to Move in Them, from Roman Britain to the Second World War

Jennifer Scarce 2002 Women's Costume of the Near and Middle East

Community content is available under CC-BY-SA unless otherwise noted.
Advertisement