For Italy there are many frescoes and paintings so this list is very selective. Good illustrations of Florentine and Sienese clothes can be found in the frescoes of Benito Gozzoli for mid-century styles and Domenico Ghirlandaio for 1470s and 1480s . Vittore Carpaccio's paintings and frescoes show style in Venice at the end of the century. Some frescoes by Fra Angelico show early fifteenth century styles. Some paintings by Bottocelli show contemporary Florentine dress but others are more on the fanciful side. Early work by Leonardo da Vinci and Perugino show contemporary clothes. Bembo Bonifazio, Lorenzo Costa and Andrea Mantegna show styles in Northern Italy.

Caution is needed with depictions of figures from the Bible. There were conventional ways of illustrating many saints and in particular the Virgin Mary which may not be showing real-world dress. Depictions of mythical characters and those from the Ancient World were often shown in more imaginary attire. In a similar way Sumptuary Laws (those governing consumption) are often a guide in a negative sense as they tried, and probabaly failed, to regulate what different status people should wear. Sermons also railed against excessive display but to little effect.

There are fewer illustrations of clothes worn by poorer people and working clothes. The famous Tres Riches Heures du Duc de Berry and the less well known Grimani Breviary show some ordinary people as well as the wealthy. A good source are illustrations of the Labours of the Months and other seasonal scenes which often depict agricultural work. One thing to remember - peasants were not always poor. Some were moderately comfortable and could afford decent but plain clothes for Sundays and Holy Days. Only the destitute wore rags. Poorer people could buy secondhand clothes and many women were skilled with a needle. Wealth was shown by fabrics, by ornamentation and by more extravagant styles.

Women wore a long chemise in undyed thin cloth next to the skin and below other garments. This was common to rich and poor with only the quality of material improving higher up the social scale from linen to fine linen or silk. Less is known about how women wore their hosen as this is rarely illustrated. They sometimes wore a thin belt and points like men or might wear garters. Stockings were probably separate unlike male hosen of the period.

The female dress in the early and mid fifteenth century throughout Europe was the Houppeland or Houppelade, a long robe with a high belted waist and wide skirt. Necklines were V-shaped and quite low with a small part of the underdress or a modesty insert like a fichu showing. Sleeves were wide in the earlier half of the cetury but tight later on.

Rosemaryr has made a splendid Houppeland for V4 in an early to mid 15th century style with fur edgng and long flowing sleeves. It is dynamic and for Poser only.

Dress styles were similar to other parts of Europe in the early to mid fifteenth century but took off in a different direction in later decades. Although the high-waisted dress remained,

An attempt to make these styles from easily available models uses the Sensibility dress and the sleeves from the Far Journeyer outfit to recreate a gamurra dress and camicia (chemise). In addition the cloak part of the Morphing Cape and Cloak for V4 can be used as a giornea, a loose overdress worn over the gamurra.

Esha did make a lovely late 15th century dress for V4 but it no longer seems to be available. The style is Northern European, based on a German illustration of 1485. The set includes shoes but not the headdress depicted. 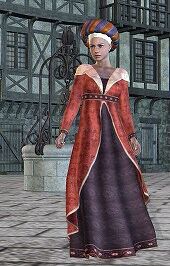 A man's clothes start with the basic undergarment, the long, loose linen or silk shirt (chemise, camicia) worn next to the skin beneath other clothing. Neck and sleeves could be decorated with embroidery, usually in the same undyed colour. He would wear hosen (calze) attached to a thin belt with ties called points. At this period they would normally be joined to cover the hips completely with a flap at the front. The old type of separate hosen was now considered obscene due to the revealing short cote or doublet styles.Hosen were either made from linen or silk and fitted or from thin woolen cloth which was more elastic. They could be made from cloth of different colours to give the parti-coloured look and sometimes decorated with embroidery. Sometimes they were worn without shoes, instead having a peice of leather sown to the foot as a sole. Pattens, strap-on platform clogs, were worn outside to keep feet and long hems out of the filth in the streets.

Above this he would wear a short, close fitting tunic (cote, farsetto, guibetto) often with padding to achieve the fashionable shape. In the earlier decades this was usually worn underneath a longer outer garment but later on was frequently worn alone by younger men. Sometimes it could be as sort as waist length. The long garment was still worn as formal dress, in cold weather and by older men. The Florentine form called a lucco is seen in many frescoes - it is closed at the neck and open in front and has openings in the sleeves for the lower arms letting the lower sleeve hang loose . Other shorter forms of outer garment were also worn, some open at the sides (giornea) to reveal the undertunic.

The outermost garment would be a loose mantle worn wrapped in different styles or a heavy cape with sleeves. Younger men might wear a short cloak slung over one shoulder - more a fashion item than a practical one. Belts were usually quite thin and sometimes worn across the hips rather than at the waist. They could support accessories such as a purse, a knife and (in the streets) a sword. Swords were not normally worn indoors.

Northern styles were similar to Italian ones for the undertunic but there seems to have been less variety in the outer garment. The cote usually had a short, flared skirt.

The set that adapts best for this period seems to be Esha's Dancar. The sleeves expand in several forms to create wide and tight combinations. The tunic skirt widens to give the popular short, flare

d styles. The boots are just about ok and the pants work well as joined hosen. The cloak and belt are not suitable for the period..

These textures are from sets by JaneB. There are threee Italian farsetti (doublets) with shirt and particoloured hosen inspired by the paintings of Venetian artist Carpaccio. One set is a shirt only, another a northern style in cut velvet and a third an early sixteenth century style with slashed sleeves.

So far there is nothing for the longer styles of male clothes.

Rosemaryr has made a series of male hats for the period. They can be used as static props in anything that can import obj files or dynamic props in Poser only.

Her sleeves sets will transform simple items like the M4 tunic and the MFD into elaborate late medieval styles. Dynamic (Poser only). M4 set and V4 set.

Community content is available under CC-BY-SA unless otherwise noted.
Advertisement